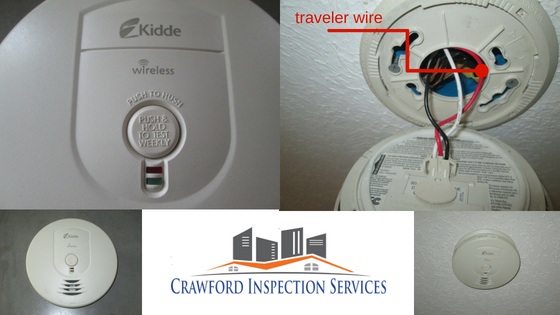 There’s no disputing the fact that smoke detectors save lives. Since smoke detectors have become common fatalities as a result of house fires have been reduced by more than 50%. Most houses built during or after the 1970s should have at least one hardwired detector in the house. It is usually located in the hallway outside the bedrooms.  Over the years building codes have changed. Now smoke detectors are required on every level and in every bedroom of a house.  Furthermore, all of the detectors in a house must be interconnected so that when one senses smoke and sounds an alarm, all of the detectors in the house sound as well.

Smoke detectors sounding in unison are particularly beneficial as it gives an early warning to people throughout the house.  Those precious seconds provide time to rescue loved ones or even potentially even find the fire and put it out before is spreads.  Without interconnected detectors, an entire wing of a house could become engulfed before someone at the opposite end would be alerted.  This system is especially beneficial for people with small children or elderly people in the house.

In modern construction, the detectors in a house are interconnected with a “traveler” wire.  Basically, it’s an extra wire that sends a signal from the detector sensing the fire to all of the other detectors in the house.  This works great for houses built with the wire in place but older houses likely don’t have the benefit of the traveler wire. Therefore, the detectors won’t sound in unison.

Luckily, there is some great technology available that enables a person to get all the benefits of an interconnected system without having to do major construction.  Wireless, interconnected smoke detector systems are reasonably affordable and easy to install.  Rather than relying on the traveler wire, the detectors broadcast a wireless signal to all of the other units in the house.  When a fire is sensed at one detector, a signal is broadcast to all of the other units and the alarm can be heard throughout the house.

Two of the biggest smoke detector manufacturers, Kiddie and First Alert, both make wireless interconnected smoke detector systems.  Each detector is typically about twice the cost of a traditional smoke detector. Considering the added capability and safety, I feel it’s well worth it.  I’ve had a wireless interconnected system in my own house for the last 10 years and it’s been flawless.  Thankfully, I’ve never needed them for an actual fire but they have sounded alarms several times when food was burned or smoke from the fireplace was pulled into the house.  The system has functioned exactly like hardwired systems that I’ve had in the past.

In the end, I’d highly recommend a wireless interconnected smoke detector system if you’re looking to bring some great modern safety to your older house. Feel free to contact me if you have any questions about these systems.