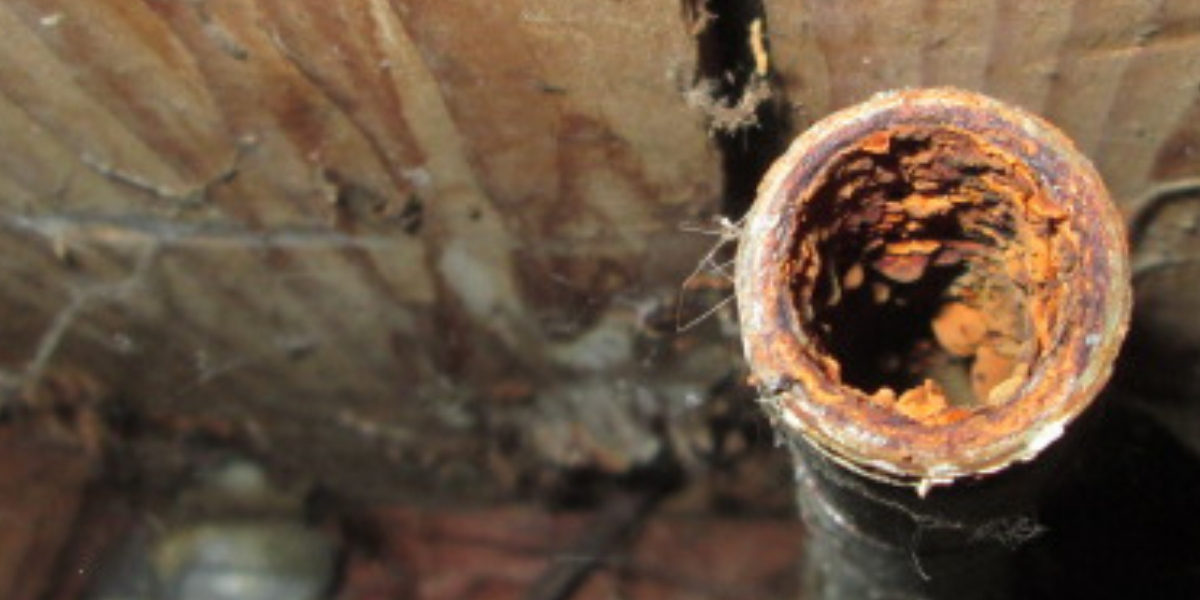 Over the years, the materials we use to build houses often change.  New products often cost less, are easier to install, or just work better.  One type of material that has largely gone the way of the dinosaur in residential construction is galvanized steel water supply pipes.

Until the mid-1970s houses were often built with steel water pipes and it was reasonably a solid material.  Mainly, the durability of the pipes was considered adequate and the material was cost effective.  I regularly see the installation of steel water pipes that are approaching 100 years old.  While the pipes will often continue to function for many years, they do have some drawbacks that often push people to replace them.

The biggest issue is that galvanized steel water pipes corrode on the inside and the buildup restricts the flow of water. Often, if a 50-year-old galvanized steel pipe is cut open, over half of the pipes’ inside area is blocked.  The flow of water is blocked, of course, means less water at the faucet. A slow faucet or poor water pressure can be an annoyance, to say the least.

Another problem occurs when attempting to use more than one fixture in a house simultaneously.  If you’ve ever been taking a shower and someone in a nearby bathroom flushes the toilet, you can’t help but notice the shower water temperature spikes instantly.  This is because the recently flushed toilet and your shower are fighting over a reduced amount of cold water, but you still have plenty of hot water.  This phenomenon is often referred to as “shower shock” for obvious reasons.

A potential major problem with galvanized steel water pipes is that after many years, the corrosion simply eats through the walls of the pipes and they leak. An early sign of a rust problem is a chalky white residue appears on the outside of the pipes but that will quickly turn into rust spots.  Once the rust spots appear, leakage isn’t far behind.  The real challenge with this problem is that most of your plumbing is contained within walls or other areas hidden from view.

There is a saying, “All good things must come to an end.”  This, unfortunately, is true with your house’s water supply pipes if they are galvanized steel. If your home has galvanized steel pipes the installation is approaching at least 50 years old. You would be wise to plan for replacement.  The pipes could continue to function for years or even decades, but the performance will continue to suffer.

An even greater concern is having rusting old pipes hidden in the walls is not a good thing.  When they leak, considerable damage can be done before the problem is noticed. The cost and trouble of replacing them now is much less than replacing them later plus fixing a water damaged home.

If you’re not sure about the type of pipes you have, call Crawford Home Improvement today.