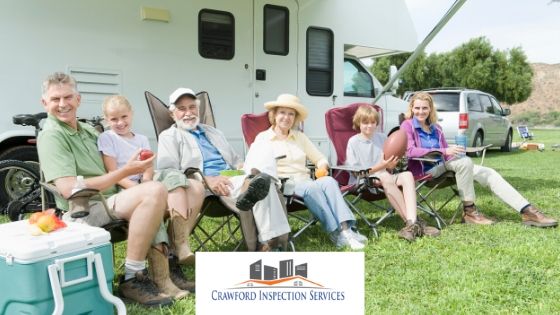 I normally write articles about home inspections and houses but I’m going to take a bit of a detour for a good cause.  This article is about RV Safety. As the weather turns warmer, millions of Americans will head out to enjoy our beautiful country in a recreational vehicle (typically, called an “RV”).  While RVs offer an amazing amount of freedom to sight-see during the day and sleep comfortably at night, there are many inherent dangers that make RVs less safe than houses.  Houses are built with thick lumber, sheet rock and other building materials strategically placed to slow down a fire and allow people time to escape.  RVs are made of thin, flammable particle board with little consideration given to what happens in a fire.  Thankfully, fires in RVs are rare but when they do occur, an RV can be fully engulfed in flames in a few minutes or less.

Be sure you show your kids and others sleeping in your RV where the egress (escape) windows are and how to operate them.  If you don’t know what I’m talking about, go educate yourself and then show your kids.  Each sleeping area should have a window that tilts out to allow a person to escape in case the door is blocked.  If you haven’t opened these windows in a few years, the heat/cool cycles can seal them shut and make it really difficult to break them free.  Each year it’s a good idea to give the egress windows a test run to be sure they open and that you can get out through them quickly.

Next, show your kids how to operate the locks on the RV doors.  They are a totally different design than a house lockset and kids usually can’t figure it out without being shown.  I’ve shown my kids numerous times and they still sometimes struggle.

Another danger for your RV Safety

Another inherent danger of RV safety is carbon monoxide poisoning.  Everything that can lead to carbon monoxide (C0) poisoning in a house is magnified in an RV.  Gas burning appliances need combustion air to operate safely and, by design, an RV has very little volume inside to draw air from.  Gas burning appliances in confined spaces are just not a great setup but it’s the way RVs are built.  So, be certain to have newer CO detectors throughout your RV.  I have 3 in mine because there are separation doors/curtains and I don’t want to have any partitioned areas where people might be sleeping to be lacking immediate protection.  Smoke detectors the same thing.  No matter how small of a sleeping area, if it can be closed off into its own compartment, it gets a detector.  Obviously, test and check batteries in all detectors often.

Recent tests have shown the sensors inside smoke and CO detectors have a fairly short reliable service life.  After just a few years the reliability of the detectors starts to fall off rapidly.  Given what I’ve read and learned, I plan to replace my RV smoke and CO detectors before they are 5 years old.  I realize this might be a bit ahead of schedule but I’m happy to spend a few extra dollars for some added assurance of safety.

The good news is tragedies in RVs are fairly infrequent but when things do go wrong they can turn really bad much more quickly than in a stick built house.  I don’t intend to scare everyone but just want to raise some awareness.  Like anything, a small amount of effort and prevention goes a really long way.